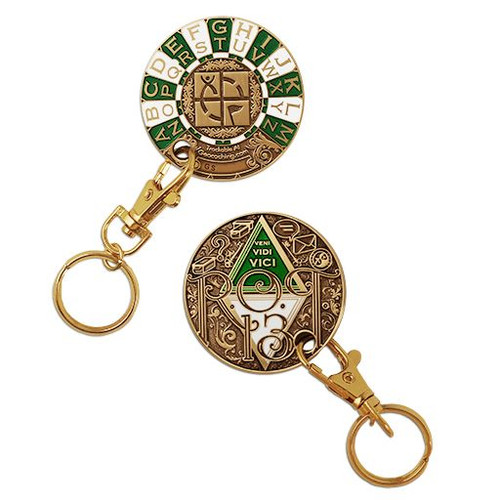 Do you speak the language of geocaching? When you find a geocache do you triumphantly declare "I came, I saw, I conquered"? We think you do.

Geocachers tend to like puzzles, codes, finding hidden things and all kinds of challenges. It's what makes us geocachers! Rot13 was actually developed by Julius Caesar (or maybe someone he knew) in the 1st century BC, and rumor has it he loved geocaching. It is a simple letter substitution that replaces a letter of the alphabet with the letter that is 13 letters after it. Have you ever wondered how the messages are coded on geocache hints? It's Rot13 of course.

This gold finish version of one our classics not only has amazing detail, but also works as a Rot13 decoder, a key chain, and is trackable at geocaching.com! With all that going for it, we think Caesar would have loved it.

This geocoin measures approximately 1.75 inches across.

For more info on this geocoin, here are some design thoughts from Christian Mackey:
The delta has been used here above and below because change (particularly in a ROT13 setting) is infinitely variable. By bracketing + or - values to either the top row or bottom row you can have an infinite number of possibilities encoding a message. Keys in Rome were often symbolic depictions of access both physical and mental. A physical encoding of a message reveals enlightenment of knowledge to solve a cache riddle or hint.

The phrase Veni, Vidi, Vici is a phrase translating to "I Came, I Saw, I Conquered (overcame)" attributed to the same Julius Caesar credited with inventing the encoding technique we now refer to as ROT13. I love the idea of combining his words, his ideas and the influential symbology of his time all in one design. The embellishments throughout both sides are common to Roman architecture and stained glass Rose window patterns.

This product hasn't received any reviews yet. Be the first to review this product!